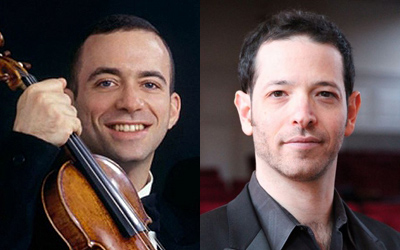 Mark Steinberg is first violinist and founding member of the Brentano Quartet, in existence since 1992. With the quartet he has performed throughout North America, Europe, Australia and New Zealand, as well as in Japan and Colombia. The quartet is ensemble in residence at Princeton University and has won many awards, such as the Naumburg Chamber Music Award, the inaugural Cleveland Quartet award and the Royal Philharmonic Society award for best debut in the UK. He is also an active chamber musician and recitalist outside of the quartet. He has been heard in chamber music festivals in Holland, Germany, Austria, and France and participated for four summers in the Marlboro Music Festival, with which he has toured extensively. He has also appeared in the El Paso Festival, on the Bargemusic series in New York, at Chamber Music Northwest, with the Chamber Music Society of Lincoln Center, and in trio and duo concerts with pianist Mitsuko Uchida, with whom he presented the complete Mozart sonata cycle in London's Wigmore Hall in 2001, with additional recitals in other cities. With Ms. Uchida he has also recorded a group of Mozart sonatas for Philips. Mr. Steinberg has been soloist with the London Philharmonia, the Los Angeles Philharmonic, the Kansas City Camerata, the Auckland Philharmonia, and the Philadelphia Concerto Soloists, with conductors such as Kurt Sanderling, Esa-Pekka Salonen and Miguel Harth-Bedoya. Mark Steinberg holds degrees from Indiana University and The Juilliard School and has studied with Louise Behrend, Josef Gingold, and Robert Mann. An advocate of contemporary music, Mr. Steinberg has worked closely with many composers and has performed with 20th century music ensembles including the Guild of Composers, the Da Capo Chamber Players, Speculum Musicae, and Continuum, with which he has recorded and toured extensively in the U.S. and Europe. He has also performed and recorded chamber music on period instruments with the Helicon Ensemble, the Four Nations Ensemble, and the Smithsonian Institute. He has taught at Juilliard's Pre-College division, at Princeton University, and New York University, and is currently on the violin faculty of the Mannes College of Music. He has taught often at the Banff Centre for the Arts, the Aspen Festival and the Taos School of Music and has given master classes at the Eastman School of Music, the Cleveland Institute of Music, and numerous other schools.

Jonathan Yates has earned high praise as a conductor, solo pianist and collaborative artist for his musicianship, intellect and the remarkable variety of his musical endeavors. He made his professional orchestral conducting debut at 23, leading the National Symphony Orchestra in a Millennium Stages Concert. The following year he made his Carnegie Hall debut as a participant in the Isaac Stern Chamber Music Workshop. He has also been heard as a chamber musician at the 92nd Street Y, Miller Theater, Bargemusic and Merkin Hall, as well as at the Caramoor Festival and on the Ravinia Festival Rising Stars Series. He has performed as a concerto soloist with orchestras in North America, Europe and Asia, and has given solo recitals for the La Jolla Music Society, at the National Museum of American History (on fortepiano), and on the University of Chicago Concert Series. He served as Apprentice Conductor of the Chicago Youth Symphony, and for two years as Music Director of the Harvard University Bach Society Orchestra. As a past and founding member of the Amelia Piano Trio, he was presented by Isaac Stern in Weill Recital Hall and at Hill Auditorium at the University of Michigan, and was a finalist for the Walter F. Naumburg Chamber Music Prize. He can be heard in chamber music of Hindemith on Cedille Records.

Jonathan is becoming increasingly sought after for his operatic work. He conducted the world premiere of Michael Webster's Hell at Performance Space 122, and Gluck's Orfeo ed Euridice and Paride ed Elena at the California Music Festival. He also led the world premiere of the first act of Adam Silverman's Korczak's Orphans at the Austrian Cultural Forum. He teaches French, German and Italian vocal diction at Sarah Lawrence College, and worked for two years as an accompanist at the Lyric Opera Center for American Artists. As an ardent devotee of new music, he has been involved in numerous premieres, was the recipient of an ASCAP award for adventurous programming, and participated as a pianist and conductor in Yo-Yo Ma's Silk Road Ensemble Tanglewood Workshops. Yates received his Graduate Diploma in conducting from the Juilliard School, where he studied with James DePreist and Otto-Werner Mueller, and was the holder of the Bruno Walter Memorial Scholarship. He received his Masters. of Music from State University of New York, where he worked with Gilbert Kalish, and his Bachelor of Arts from Harvard University, where he studied with Robert Levin. He currently serves as conductor of the Sarah Lawrence College Orchestra.