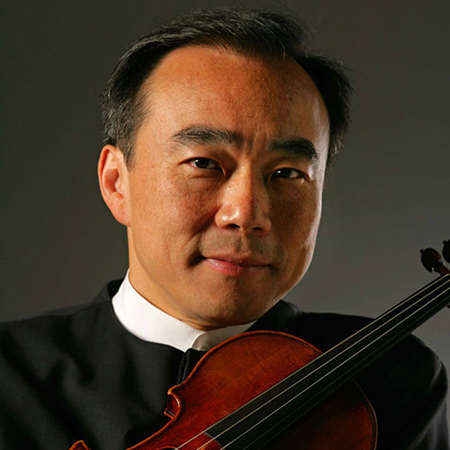 In recent seasons, Mr. Lin has expanded his orchestral engagements to include performances as both soloist and conductor with the Shanghai Symphony, the Singapore Symphony, the National Symphony Orchestra of Taiwan and the symphonies of Detroit, San Antonio, and Shanghai. As an advocate for music of our time, Mr. Lin has enjoyed collaborations and premieres with composers such as Tan Dun, Joel Hoffman, John Harbison, Christopher Rouse, Esa-Pekka Salonen, Lalo Schifrin, Paul Schoenfield, Bright Sheng, and Joan Tower. An avid chamber musician, Mr. Lin appears at the Beijing Music Festival, as well as his perennial appearances performing at the Chamber Music Society of Lincoln Center, the Aspen Music Festival, and Santa Fe Chamber Music Festival. His extensive discography includes recordings for Sony Classical, Decca, Ondine, Naxos and BIS. His albums have won such awards as Gramophone’s Record of the Year, as well as two Grammy Award nominations.

Born in Taiwan in 1960, Cho-Liang Lin began his violin lessons when he was 5 years old with Sylvia Lee. At the age of 12, he went to Sydney to continue his musical studies with Robert Pikler. Inspired by an encounter with Itzhak Perlman while in Sydney, he traveled to New York in 1975 to audition for Perlman’s teacher, the late Dorothy DeLay, at the Juilliard School. He was to study with Miss DeLay for six years. At the age of nineteen Mr. Lin made his New York debut at the Mostly Mozart Festival and soon thereafter with the New York Philharmonic and his concert career was launched. In 2000 Musical America named Mr. Lin its Instrumentalist of the Year. He was invited to join the faculty of the Juilliard School in 1991. More recently he was appointed professor of violin at Rice University’s Shepherd School of Music. He plays the 1715 "Titian" Stradivarius.