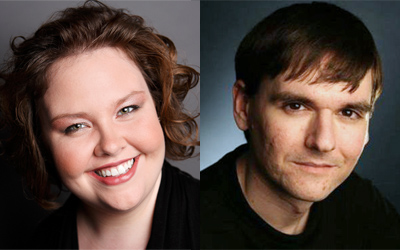 The winner of both the Main and the Song Prizes at the 2013 BBC Cardiff Singer of the World Competition, a winner of the 2007 Metropolitan Opera National Council Auditions, and a Grammy nominee, American mezzo-soprano Jamie Barton has been described by The Guardian as “a great artist, no question, with an imperturbable steadiness of tone, and a nobility of utterance that invites comparison not so much with her contemporaries as with mid-20th century greats such as Kirsten Flagstad.”

Ms. Barton’s 2013-2014 season featured returns to the Metropolitan Opera as Adalgisa in Norma, the Houston Grand Opera as Fricka in their upcoming Ring, and as Katisha in Opera Memphis’ The Mikado, and her Japanese debut as Meg Page in a new production of Falstaff at the Saito Kinen Festival under the baton of Fabio Luisi. In concert, Ms. Barton performed the Verdi Requiem with the Melbourne Symphony and Sir Andrew Davis, Britten’s Spring Symphony with the Cleveland Orchestra and Franz Welser-Möst, a Concert of Verdi Arias and Ensembles at the Lanaudière Festival with Jean-Marie Zeitouni, and Elgar’s Sea Pictures at the Aspen Music Festival. She also made her French debut at the newly-founded Montreuilsur-Mer Festival in a Concert of French Opera followed by a performance of the Sea Pictures.

In recent seasons she has performed Mozart’s Requiem with Milwaukee Symphony Orchestra under Edo de Waart, Schubert’s Mass No. 6 with San Diego Symphony, and Beethoven’s Symphony No. 9 with the Omaha Symphony. In recital she appeared with the Vocal Arts Society at the Kennedy Center, under the auspices of the Marilyn Horne Foundation, as well as Carnegie Hall as part of their Great Singers III: Evenings of Song series.

With conducting described as “powerful” and “hefty” by the New York times, American conductor Vince Lee is quickly rising as one of today’s top emerging talents. Known among his contemporaries for his dynamic performances and his razor-sharp ear, his diverse musical background provides him a level of flexibility that is unique in the industry. During his three years with the Cincinnati Symphony, he revolutionized his role as Assistant Conductor for the orchestra. His numerous concerts with the CSO received critical acclaim, combining elements of increased interactivity with the highest artistic standards. He has been performed over 50 premiere works. He conducted 17 orchestral concerts during his time at IU, and served as assistant conductor for the IU New Music Ensemble, Opera Theater, and Ballet. During this time, he still remained active as a pianist and coach, conducting both the IU graduate and undergraduate Opera Workshop programs.

He was invited to study at the Juilliard School by Maestro James DePreist, he quickly became in demand throughout New York City. At Juilliard, he was appointed Musical Director for the MAP orchestra (a Juilliard faculty position) and served as principal pianist for the Juilliard orchestras. A vigorous supporter of musical collaboration, he conducted for the Dance and Composition departments, as well as for the “Beyond the Machine” series. he toured with Juilliard’s AXIOM ensemble, making his European debut at the Tonhalle in Zurich, Switzerland. Other New York conducting engagements include appearances at the Manhattan School of Music, NYU, Bargemusic, Symphony Space, and Alice Tully Hall. Most recently, he appeared in concert with violinist Gil Shaham at the Aspen Music Festival, Carnegie Hall with the AZLO Orchestra, and the NYCA Orchestra.