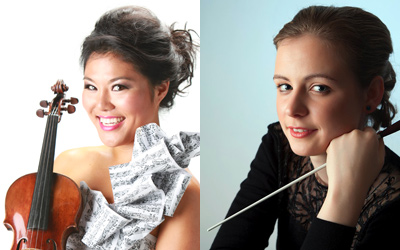 Among her numerous awards and honours, Miss Park won top prizes at the International Violin Competition of Indianapolis and the Wieniawski Competition (Poland), and was winner of the Yehudi Menuhin International Competition (France), resulting in performances and re-engagements throughout the US and Europe. She won the Richard Goldner Concerto Competition and the Ernest Llewellyn String Award, took top prize in the National String Division of the Australian Broadcasting Corporation's Young Performer's Award and her performance with the Melbourne Symphony Orchestra was televised nationally, earning her the Victorian Premier's Award.

A passionate chamber musician, Miss Park was the violinist of the Eroica Trio from 2006 to 2012. Highlights include releasing the Trio's Grammy®-nominated eighth CD for EMI featuring all-American music, "An American Journey", and embarking on international tours in countries including New Zealand, Brazil and Denmark, Germany with the Royal Philharmonic Orchestra and the US with Vienna Symphony Orchestra in venues including New York’s Avery Fisher Hall and Chicago’s Millennium Park. Miss Park was a member of the Chamber Music Society of Lincoln Centre Two collaborating with such Society members as Wu Han, Gary Hoffman and Ida Kavafian. She has participated in numerous tours with Musicians from Marlboro to critical acclaim as a result of her three consecutive summers in residence at the Marlboro Music Festival. Collaborations include performances with members of the Guarneri, Juilliard, Emerson and Cleveland Quartets, Kim Kashkashian, Pamela Frank, Jason Vieaux, Jimmy Lin and Jaime Laredo, and her numerous festival appearances include Music from Angelfire in New Mexico, Caramoor and Skaneateles Festivals in New York, Open Chamber Music at Prussia Cove, England, the Ravinia Festival, Aspen Music Festival, the Bermuda Festival, Sommerakademie Mozarteum in Austria and Israel's Keshet Eilon.

A native of Sydney, Australia, Miss Park first picked up the violin at age three, making her solo recital debut at the age of five. She earned her Bachelor of Music degree from the Curtis Institute of Music and an Artist Diploma at the New England Conservatory. Miss Park served as Concertmaster of the Curtis Symphony and the New York String Orchestra in Carnegie Hall and her teachers included Jaime Laredo, Ida Kavafian, Donald Weilerstein, Miriam Fried, Shi-Xiang (Peter) Zhang, and Christopher Kimber.

Recently named a Dudamel Fellow by the LA Philharmonic, New Zealand-born conductor Gemma New serves as Associate Conductor for the New Jersey Symphony Orchestra and is the Founder and Director of the Lunar Ensemble, a contemporary music collective in Baltimore, Maryland.

Along with her appearances with the NJSO and the Lunar Ensemble, Ms. New has recently led concerts with a range of orchestras, among them, the Atlanta and Miami Symphony Orchestras as well as the Hamilton Philharmonic in Canada and Opus Orchestra in New Zealand. Upcoming guest conducting engagements include performances with Camerata Notturna and the New Amsterdam Symphony in New York. Additionally, Ms. New will return to New Zealand in 2015 to conduct the Christchurch Symphony Orchestra for the finals of the National Concerto Competition.

In 2013, Ms. New made her Carnegie Hall conducting debut, leading works by Adams, Norman and Ives on the American Soundscapes series, where she was mentored by John Adams and David Robertson. That same year, she was selected as the David A. Karetsky Conducting Fellow at the American Academy of Conducting at the Aspen Music Festival. Passionate about music education, Ms. New enjoys working with the NJSO-affiliated Greater Newark Youth Orchestra. She was also guest conductor for the 2013 New Jersey All State Orchestra. Between 2007 and 2009, Ms. New conducted the Christchurch Youth Orchestra, which grew from 40 to 70 players under her leadership and performed upwards of nine concerts a year.

Ms. New earned the Master of Music degree in orchestral conducting at the Peabody Institute in Baltimore, where she studied with Gustav Meier and Markand Thakar. She previously graduated from the University of Canterbury, New Zealand with a Bachelor of Music (Honors) in violin performance.

Ms. New was awarded the Ansbacher Fellowship, in which she was selected by members of the Vienna Philharmonic to reside at the Salzburg Music Festival in 2012. In September 2014, at the invitation of Maestro Kurt Masur, she resided for three weeks in Leipzig, Germany as a Felix Mendelssohn-Bartholdy Fellow, where she studied Mendelssohn’s music under Maestro Masur and conducted the Leipziger Symphonieorchester in a concert at the historic Lindensaal in Markkleeberg.