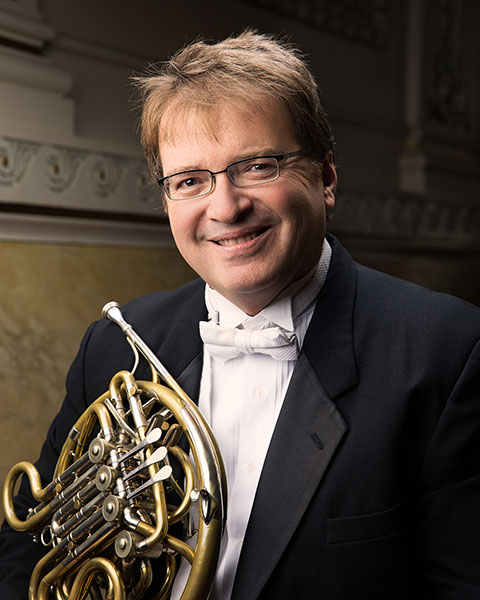 William Caballero is one of the world's leading French horn players, highly sought after as soloist, orchestral leader, and as a chamber musician. He is the Principal Horn of the Pittsburgh Symphony, a position he has held for 29 years under its Maestros Manfred Honeck, Marris Jansons and Lorin Maazel. Before joining the Pittsburgh Symphony in May 1989, Caballero previously held Principal Horn positions with the Houston Symphony, Houston Grand Opera and Hartford Symphony, as well as Third Horn positions with the Montreal Symphony, Montreal Opera and acting Third Horn with the Boston Symphony and Boston Pops. He has performed as guest Principal Horn with Chicago Symphony Orchestra, the Cleveland Orchestra, the Philadelphia Orchestra, the Los Angeles Philharmonic, the Dallas Symphony Orchestra, and the St. Louis Symphony.

Born in New Mexico and raised in Wisconsin, Caballero’s early horn studies included working under Larry Simons, Barry Benjamin and Basil Tyler, as well as studying the piano and pipe organ. Caballero graduated from New England Conservatory in Boston where he studied with Richard Mackey and Thomas Newell, both former members of the Boston Symphony.

Caballero is also in demand as a chamber musician collaborating with musicians such as violinists Gil Shaham, Joseph Silverstein and Philip Setzer, and pianists André Previn, Christoph Eschenbach, Orli Shaham and Andre Watts. William has also performed and worked with jazz musician and composer Chris Brubeck, as well as ensembles that include the Tokyo String Quartet, Trio Johannes, Principal Strings of the Berlin Philharmonic, Center City Brass, Bay Chamber Concert Series, St. Barth’s Music Festival and the Grand Teton Music Festival. He is also a member of the Pittsburgh Symphony Brass, which includes fellow colleagues of the Pittsburgh Symphony Brass section.

Other recent solo appearances outside of the Pittsburgh Symphony have included performances in Montenegro with Maestro Ronald Zollman and with the Carnegie Mellon Philharmonic at New York City’s Carnegie Hall under the baton of former Principal Horn of the Chicago Symphony Orchestra, Dale Clevenger.