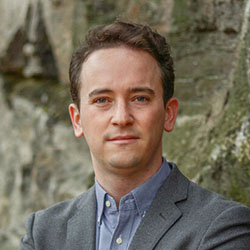 Acclaimed New York-based conductor Kyle Ritenauer is establishing himself as one of classical and contemporary music’s singular artistic leaders. As founder and artistic director of the Uptown Philharmonic, Ritenauer has earned renown for his detailed and imaginative musicality, and has found further success leading ensembles across North America, Europe, and Asia.

Ritenauer’s 2021 schedule includes regular engagements as guest conductor at the Manhattan School of Music. This summer, he will attend the Aspen Music Festival and School’s Conducting Academy as a Fellow.

Ritenauer has led orchestras in myriad genres, including a collaborations with Broadway superstars Kelli O’Hara and Matthew Morrison, and giants of contemporary music such as Claire Chase and Richard Danielpour. He was particularly honored to conduct a Juilliard School workshop of American Symphony by Jon Batiste, bandleader of the Late Show. Through the Bridge Arts Ensemble which he founded in 2015, Ritenauer curated interactive, grade-specific concerts and workshops for 50,000 students across the Adirondack region of New York state.

As founder and artistic director of the Uptown Philharmonic, Ritenauer captures performances of new and undiscovered works in high quality video, ensuring online visibility beyond their premieres. In one of its more visible collaborations, the ensemble gave the world premiere of Richard Danielpour’s new ballet, Cassandra’s Curse. The work’s performance premiere came in a four-show run at NYC’s Joyce Theater in collaboration with RIOULT Dance NY, while its studio recording was developed with Grammy®-winning sound engineer John Kilgore.

Ritenauer holds a deep fondness for contemporary music, reflected by a performance résumé that includes over 75 world premieres. In 2013, Ritenauer collaborated with the Manhattan School of Music to create a new master’s degree in Contemporary Conducting. Working with the MSM composition department, he led an unprecedented number of premiere performances in collaboration with its students.

A student of Maestro David Robertson, Ritenauer is a recent graduate of The Juilliard School’s Bruno Walter Conducting Program, where he received the Charles Schiff Conducting Prize. He owes much of his development as a musician to the Pierre Monteux School for Conductors, where he studied for nine summers with Michael Jinbo. Other cherished pedagogues include Kurt Masur, Leonard Slatkin, Robert Spano, and Tito Muñoz. 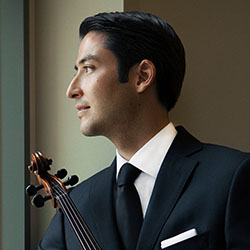 Praised for his "burnished sound" (The New York Times) and described as an "electrifying, poetic, and sensitive musician," the Grammy Award-winning, Japanese-Norwegian violist Masumi Per Rostad hails from the gritty East Village of 1980s New York. He was raised in an artist loft converted from a garage with a 1957 Chevy Belair as the remnant centerpiece in their living room. Masumi began his studies at the nearby Third Street Music School Settlement at age three and has gone on to become one of the most in demand soloists, chamber musicians, teachers. In addition to maintaining an active performance schedule, he serves on the faculty of the prestigious Eastman School of Music in Rochester, NY.

Masumi regularly tours internationally and has performed at many of the most prominent festivals, including Marlboro, Spoleto USA, Music@Menlo, Caramoor, Music in the Vineyards, Bowdoin, and the Aspen Music Festival. His guest violist collaborations include programs with the St Lawrence, Ying, Pavel Haas, Miró, Verona, and Emerson String Quartets, as well as with the Horszowski Trio. He toured and recorded extensively as a former member of the International Sejong Soloists. He can be heard on the Cedille Records, Naxos, Hyperion, Musical Observations, Bridge, and Tzadik record labels.

As a member of the Pacifica Quartet for almost two decades (2001-2017), Masumi regularly performed in the world’s greatest halls including Amsterdam’s Concertgebouw, Tokyo’s Suntory Hall, Sydney’s City Hall, New York’s Carnegie Hall and Lincoln Center, London’s Wigmore Hall, Vienna’s Konzerthaus and Musikverein, Munich’s Herkuleshaal, Paris’ Louvre and Cité de la Musique, and Berlin’s Konzerthaus among many others. He was full professor of viola and chamber music as quartet-in-residence at Indiana University's Jacobs School of Music. In 2006, the ensemble was awarded the coveted Cleveland Quartet Award, Avery Fisher Career Grant, and they were also named Musical America’s 2009 Ensemble of the Year.

Masumi is an ardent advocate for the arts, and often sought after as a contributing writer to such publications as the Huffington Post, Strings and Gramophone magazines as well as The Guardian.

Passionate about breaking down barriers that prevent people from enjoying Classical music, Masumi was the founder of DoCha, a chamber music festival in Champaign, Illinois that produced innovative events with a focus on engaging new audiences through fun and inventive programming. DoCha-hosted events featured unique collaborations between members of the University and multi-genre presentations from Classical chamber music to contemporary dance, the spoken word, and much more. All programs were free of charge and took place at a beautiful former community Opera House. Other activities of DoCha, included ‘in-reach’ performances for elementary school students as well as master classes, competitions and performance opportunities for local music students.

He received his Bachelor and Master of Music degrees from The Juilliard School. There, he studied with legendary violist and pedagogue Karen Tuttle from the age of 17 and was made her teaching assistant just three years later at the age of 20. At Juilliard, he was awarded the ‘Lillian Fuchs Award’ for the most outstanding graduating violist. He also won the Juilliard School Concerto Competition and performed the world premiere of Michael White's Viola Concerto in Lincoln Center’s Avery Fisher Hall, with conductor James DePreist. That same year he gave the New York premiere of Paul Schoenfield's Viola Concerto with the Juilliard Symphony to critical acclaim. In 2008 he was awarded the ‘Rising Star Award’ by the Third Street Music School Settlement for his musical achievements

Masumi lives in Rochester, NY with his wife Sonia – a concert pianist – and their daughter, Ling. He is professor of viola and chamber music at the Eastman School of Music. He is a D’Addario Artist and has used their strings since 1999. Celebrating a 400 year birthday in 2019, his Amati viola was crafted in Cremona, Italy in 1619.