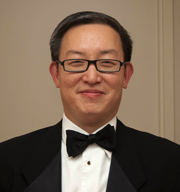 What do you do when you're not making beautiful music with Camerata Notturna?
I'm a neurologist at Columbia-Presbyterian, but I spend most of my effort doing research in structural biology using x-ray crystallography as a way to determine the structures of biological macromolecules. I'm interested in how receptors function, and my focus has been on rhodopsin, a protein in the photoreceptor cell which is responsible for our visual sense. As it turns out rhodopsin is also a model for a whole class of receptor molecules which receive information about hormones, neurotransmitters, tastes, and smells.

Tell us a little about your relationship with your instrument.
As it turns out, I've only just begun my relationship with my current fiddle, having commissioned it 2 years ago from a wonderful American luthier (Howard Needham) and receiving it just this past spring (2009). Like most string players, I started playing as a child (age 9) because my parents thought it would be a good thing. At about age 14 I finally really got into it, so much so that the family started worrying that I would try to be a professional musician. After having played through college and beyond, I laid it down for a while as I pursued my medical training. A few years ago as my twin daughters got out of diapers, I finally had a little time to indulge myself, and once again pursued studies on violin. It's also been great fun having my girls start playing, one on cello and the other on violin.

What is your proudest musical moment?
One of the most memorable experiences was a concert from college. Our music director (James Yannatos) had composed a large work for symphony, multiple choirs, and vocal soloists called the Trinity Mass that decried the development of atomic weapons. As one of the orchestra managers, dealing with the logistics was a nightmare, and quite frankly I was skeptical of the value of the entire endeavor. For the premiere we managed to arrange dual performances, one at Harvard and the other at the Cathedral of St. John the Divine in New York. It turned out that all of the rehearsing was well worth the effort and I was quite moved by participating in such a large event.

What does this orchestra mean to you?
One of the things about returning to the violin after a fallow period was finding avenues for performance. I heard about Camerata by chance from a graduating Juilliard student that I met at Yung Chin's when I was getting some work done on my bow. She said that it was an incredible group of musicians and that they had a reputation for great performances and also managed to draw great soloists. I was a little worried about how I would fit in, especially when I found out that I was a bit older than the rest of the group, but it's been great fun meeting all sorts of talented slightly younger people who are all so committed to playing music together, and the after parties and relaxed social atmosphere really lend a wonderful esprit de corps.

What is your favorite Notturna moment?
Being new to the orchestra I don't have many moments to choose from. Playing my first concert with Camerata was a blast. I'm looking to forming many more memories.

Tell us a random interesting fact about you.
I used to play a mean bagpipe as a youth. The parochial school I attended in Houston had a pipes and drum band. It was a strange situation that arose because a famous highland dancer happened to retire (God knows why) in Houston and lived next door to the principal. When I was in 6th grade, the school band made plans to do a Scotland trip for the band, and as enticement listed a number of pieces that if mastered would allow one to join in on the trip. The trip was really meant for the high-schoolers, and they were a bit shocked when the Korean kid said he was ready to join the tour. Somehow my parents let me go and for 3 weeks I visited various locales. Being only 11, I somehow convinced myself that I would get to march in the various contests, but of course the stride length of an 11 year old Korean boy and an 18 year old Texan were not going to match for a marching competition! Still it was all great fun, and I even got to play for a town mayor at one of our visits, and another time got a picture in the local paper when a reporter got interested in the funny-looking American competitor.