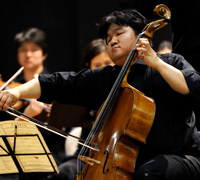 What do you do when you're not making beautiful music with Camerata Notturna?
I'm a corporate lawyer at a firm in New York.

Tell us a little about your relationship with your instrument.
I own it.

How about the cello itself?
"Lumpy" got his name from the fact that when I got him, he had extensive water damage to its bottom half; surfaces that were supposed to be flat instead mimicked the rolling hills of Italy's Tuscany region, where he was made.

What is your proudest musical moment?
I remember being very proud,at the age of eight, to have gotten into my elementary school orchestra (after several failed attempts). The fact that I only got in because of a breakout of chickenpox which decimated the cello section did nothing to dampen my unbridled joy and enthusiasm at finally being allowed to play with others.

Funny or embarrassing musical experience?
I feel like there are too many to mention, but here are a few:
1) When I was a kid, I tried to sled down my snow-covered driveway using my cello case, a la James Bond in The Living Daylights. It didn't work.
(Come to think of it, neither has laying cheesy, pun-filled pickup lines on glamorous women at bars, casinos, or secret underwater lairs).
2) I have gotten lost, several times, in the cello part of Pachelbel's Canon, which consists of just eight notes, repeated over and over.
3) I once played cello in a parade, sharing a float with WWF superstar Randy "Macho Man" Savage. I played the Gigue from Bach's Suite no. 6; everyone else played something different.

What this orchestra means to me:
I get to be the boss of something.

Favorite Notturna moment:
They're all my favorite! If I had to pick, though, the ones that I will cherish especially are those that I spent working with Colin Carr and Gil Kalish, two of my musical heroes. I also really, really enjoy our post-concert festivities, probably a little too much!